A centenary of the end of WWI with music, readings and poetry

In September 2018 150 guests gathered in the historic tithe barn at Meesden Bury for an evening of music, readings and poems led by local noted musician, Ros Holbrow and friends.

In 1911 two young Australians arrived in England, getting work with Thomas Octave Murdock (Tom) Sopwith shortly before the registering of the Sopwith Aircraft Company at Kingston. They were Harry Kauper and Harry Hawker, whose granddaughter lives in Meesden.

Hawker having been taught to fly by Sopwith, and gaining his Pilot’s License went on to work as a mechanic and tester on a small aircraft, called ‘The Tabloid’. In the spring of 1914 Harry took the Tabloid to Australia, Moorabin just South of Melbourne where his father had a garage. Just round the corner was a golf course; Harry asked if he could use the course for take off and landing. True to form, the golf course said ‘No’. Whereupon Harry took off from the street through impediments such as cables. The golf course management were so horrified that they relented.

WW1 was a period of the fastest expansion and development of the company and of fighter aircraft. By 1918 the company had developed several fighter aircraft, among them being The  Strutter, The Baby, The Pup and finally The Camel. The Camel was supremely maneuverable, the gyroscopic effect of its powerful engine enabling right turns to be effected at will. The downside being that in inexperienced hands it continued into a spin until hitting the ground.

The recent excitement over the foundation of the Royal Airforce has failed to give credit to those many many pilots of the Royal Flying Corps who lost their lives flying during WW1.

Hawker was a designer, test pilot and demonstrator of all types of Sopwith Aicraft, going on after the war to be the first to attempt the Atlantic crossing by air in 1919 (and surviving having ditched in the sea) with his navigator, Commander Mackenzie Grieve. Hawker was killed in an accident at Hendon in 1921.

See The Meesden Village Website for details and ticketing for September 29th, the ‘Final’ event of Words, Music and Poetry + Local Family Tales from WW1.

Cecila was the younger daughter of Baron Dimsdale of Meesden Manor. Her two brothers had been killed, Edward in April 1915 at Ypres and Reginald, torpedoed in Submarine E22 in 1916 in the North Sea.

She drove ambulances from the forward dressing stations behind the front line to the British Army Hospitals at Le Treport where they were treated and sent home as soon as they were fit to travel. 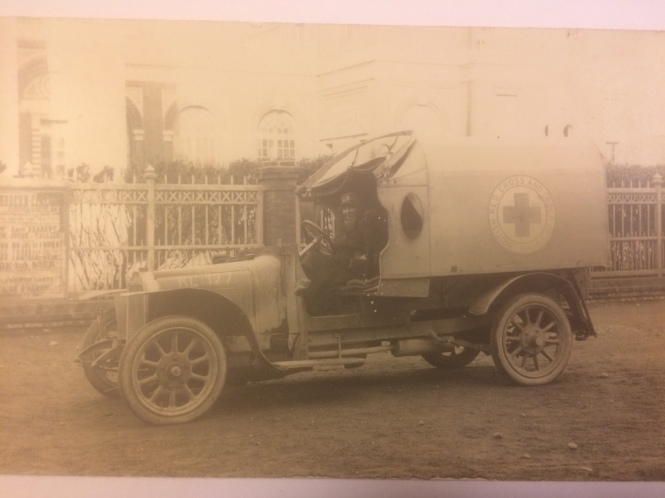 She was adept at changing wheels and repairing punctures. She had to endure journeys with very badly wounded but conscious soldiers, sometimes delirious.

Ambulances suffered broken brake cables and breaking down. The sound of the engine she compared to the clicking of pins, and once when taking me out from school in Hastings, on one particular hill, she said that if we had been in her ambulance, it would have had to go up in reverse gear.

She was a smoker, latterly of Marlboro cigarettes, a habit she gained when in France.

She was badly affected by the war years; in fact she never really recovered fully.

Please, we would like experiences of any family members, local or not, of whatever they did during WW1, not necessarily in the forces but on home fronts. These, we hope will appear in the Parishes Magazine.

Meesden is having a celebration of the end of the war, a bit early I am afraid on the 29th September 2018. It will take the form of songs, poetry and music from the time, put on by a group, led by Ros Holborow at Meesden Bury. We hope at the end of the performance, we will be able to include short pieces by local people talking about their own family members’ tales. We hope too to have an exhibition too, featuring local people and what they did during WW1.